The 2015 Professor Emeritus Title Conferral Ceremony was held on Wednesday, April 1, 2015, in the Conference Room at B-Con Plaza in Beppu City just before the Spring Entrance Ceremony. At the ceremony, Professor YAMAGAMI Susumu and Professor PORTER Edgar A., both of the College of Asia Pacific Studies, were awarded the title of Professor Emeritus by APU President KORENAGA Shun in recognition of their educational and research achievements. 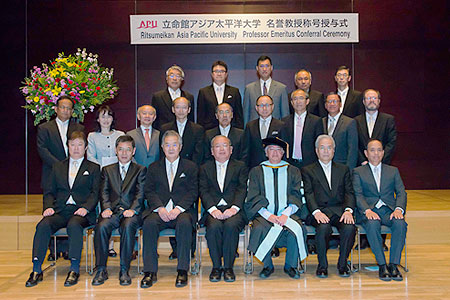 Professor Emeritus YAMAGAMI’s educational accomplishments include undergraduate lectures held in cooperation with the Yomiuri Shimbun newspaper company and relay lectures with international institutions, which contributed widely to the offering of subjects which awake diverse intellectual curiosity in young students. Furthermore, he has played a central role in the acceptance of students for the JICA “JDS” (Japanese Grant Aid for Human Resource Development Scholarship) and “CDS” programs, with which APU’s graduate school is involved, and is very enthusiastic about securing and supervising graduate students. In addition, he has held important posts in APU’s administration such as Dean of Student Affairs, AP House Director, Dean of Academic Affairs, Dean of College of Asia Pacific Studies and Vice President. He has made a considerable contribution to APU’s growth since the time the University opened through to the present. 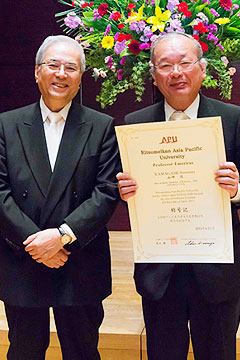 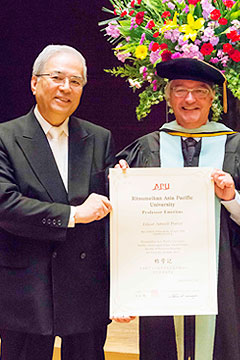 Professor Emeritus PORTER served as field leader for English in the Center for Language Education, Dean of Academic Affairs, the Executive Director of the APU Institute HQ, Pro Vice-President and Chairman of the FD/SD Steering Committee as well as serving as a committee member for the Asia Pacific Association for International Education (APAIE) outside of APU and being in charge of negotiations when implementing APU’s dual degree program with the Salzburg University of Applied Sciences. In these ways, he has greatly contributed to the development of the University’s international educational programs. At APU, Professor PORTER has taught subjects which made use of his abundant firsthand knowledge in the field of international education. Additionally, as regards his regional research of Mongolia, which has been the focus of his research in recent years, he has also striven to return his research results to the University through leading students on field study programs and contributing to the Ritsumeikan Journal of Asia Pacific Studies (RJAPS).

The title of Professor Emeritus has been conferred in accordance with the Ritsumeikan Asia Pacific University Regulations for Professors Emeriti on those who have contributed outstanding educational and / or research achievements to the University. APU has conferred this title on 25 individuals, including this year’s awardees: Professors Emeriti YAMAGAMI and PORTER.