On Friday, April 3, the most recent holding of the International Forum for Trilateral Cooperation 2015 took place in Tokyo. 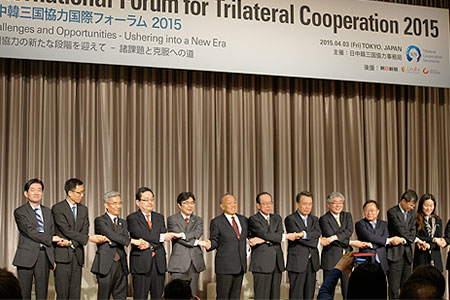 Upon the Japan-China-Republic of Korea (ROK) trilateral summit held in 2010, the Trilateral Cooperation Secretariat (TCS) was established with the purpose of ensuring peace and common prosperity among the three nations. With this platform in place, the International Forum for Trilateral Cooperation has been held regularly since the following year in 2011. The 2015 holding of the Forum marks the first time it was conducted in Japan. 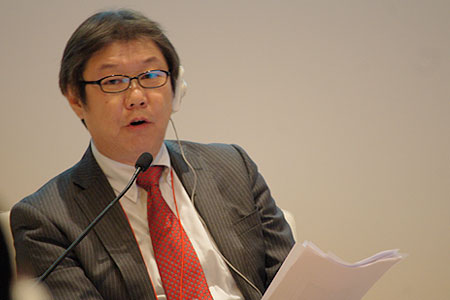 That panel discussion included a presentation on the situation surrounding the mutual understanding and growth of students from Japan, China and ROK who are participating in the Campus Asia Program that was initiated in 2011, as well as a presentation on the extent to which the European Region Action Scheme for the Mobility of University Students (ERASMUS) has contributed to youth exchange and peace-building. An educational exchange program led by the EU, ERASMUS features the participation of three million students and 4,000 universities from 33 countries as of 2012. 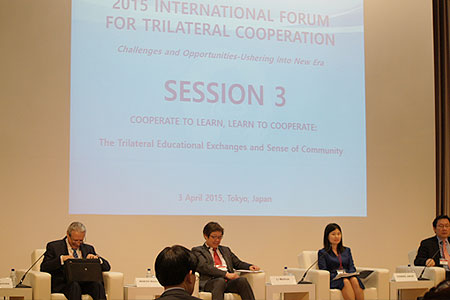 After touching upon the current state of educational exchange in Japan and case examples of Campus Asia initiatives at Ritsumeikan Academy, Vice-President IMAMURA also discussed how Japanese, Chinese and Korean students at APU will gradually become conscious of the roles that their respective countries should fulfill in their capacity as major Asian powers by engaging in discussion with a diverse variety of students from around the globe.

Even in times when relations between Japan and China and Japan and ROK were in a phase of cooling down, the TCS staff members from each country responsible for operating the International Forum for Trilateral Cooperation have continued to go beyond national borders to steadily coordinate a relationship of cooperation between their three countries one step at a time. 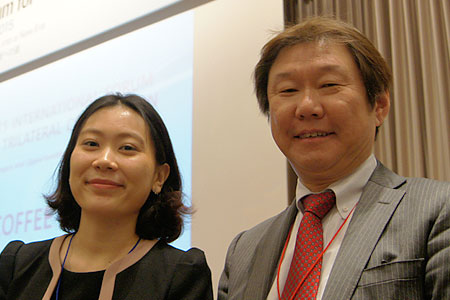 APU alumna Ms. YANG Soo Young (College of Asia Pacific Studies, 2008), who also served as the secretariat for this Forum, has been employed as a TCS staff member since completing a master’s program at Stanford University in the United States.

Going forward, APU will continue to nurture global human resources who will be professionally active in forums of exchange, dialogue and negotiation that transcend national boundaries.