On June 17, 2015, a kickoff event was held for the establishment of the Research Center for Muslim Affairs (RCMA) with over one hundred and twenty participants from around forty companies, organizations and municipalities. 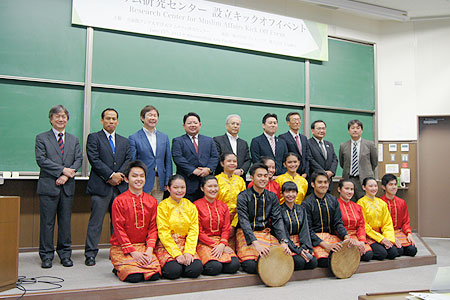 The event opened with a spectacular performance of traditional "Saman dance" by students from Indonesia. To continue, congratulatory speeches were presented by Beppu City Mayor Yasuhiro Nagano and Takanori Achiwa, the General Manager of Corporate Banking Supporting Division at Oita Bank.

For the keynote address, President and CEO Takatsuki Ryosuke of Inspire Corporation presented a lecture titled, "Hospitality towards Muslim People-opportunities for the future" which discussed the current state of support for Muslims in Japan and the future growth potential of the inbound market.

Following the conclusion of the event, a meeting was held to exchange information between the participating companies, organizations and APU faculty members.

We hope that you look forward to the future initiatives from the RCMA.