On May 22, 2015, APU presented H.E. Mr. ELBEGDORJ Tsakhia, the President of Mongolia, with an honorary doctorate at a ceremony held at the Tokyo Imperial Hotel. President KORENAGA Shun presented the honorary degree to President ELBEGDORJ, who was accompanied by Chief Cabinet Secretary H.E. Mr. BAYARTSOGT Sangajav, the Minister of Foreign Affairs H.E. Mr. PUREVSUREN Lundeg, and Ambassador Extraordinary and Plenipotentiary of Mongolia to Japan H.E. Sodovjamts KHURELBAATAR. H.E. Mr. SHIMIZU Takenori, the Ambassador Extraordinary and Plenipotentiary of Japan to Mongolia, was also in attendance. 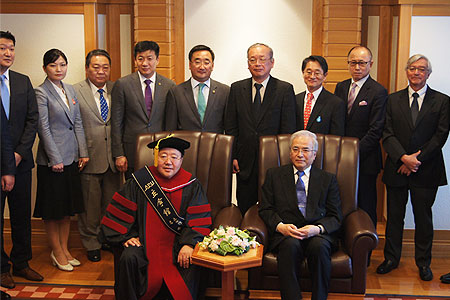 Before the ceremony, a discussion was held with President ELBEGDORJ. He expressed a keen interest in the fact that many Mongolian students come to APU to study and play active roles in Japan, Mongolia and other parts of the world once they graduate. He also showed an interest in APU's multicultural campus where students from nearly 80 countries and regions come to live and learn together. In addition, he mentioned that APU bears many similarities to the Forum of Asia, a community of 48 Asian states that he has proposed to create. The Forum of Asia will grant every member equal voting rights regardless of size and utilize a Council of Europe-style platform to promote the economic development of the Asia Pacific region and seek solutions to major issues such as security. President ELBEGDORJ said that Asia needs an institution that can keep large countries in check while protecting the rights of small countries.

He also expressed a strong interest in using the opportunity of this honorary degree conferral to bolster ties with APU.