On Wednesday, July 8, 2015, the 1st Indo-Japan Conclave, an event organized by an Indian student group, was held at APU. The event aimed to explore new possibilities for Japan-India relations by focusing on the Make in India campaign, an industrial promotion program devised by Prime Minister Modi that aims to attract a variety of companies to India from overseas and to invigorate the Indian manufacturing sector. 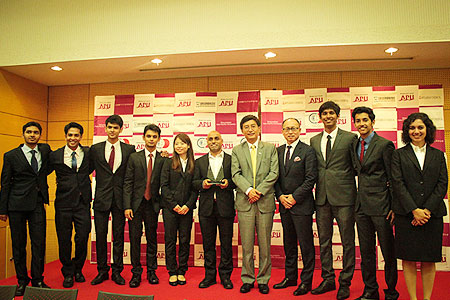 Swathinath VIJAWAN, the chairman of the student committee, commenced the event by explaining the objective and expressing his joy in being able to hold the Conclave at APU. He thanked everyone in attendance and introduced the two guest speakers.

First, Mr. Tshering W. SHERPA, the Counsellor for Political Affairs from the Embassy of India in Japan, gave a presentation on the government's Make in India campaign, during which is discussed the various policies India is undertaking to promote manufacturing. After giving the background of the campaign, he talked about India's economic growth, its economic ties with Japan and the increase in the number of Japanese companies setting up shop in India. 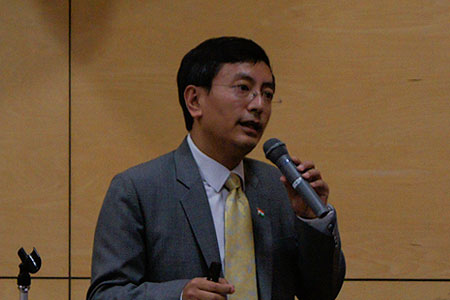 The next speaker was Mr. Sanjeev SINHA, a published author and consultant focusing on business that connects Japan and India. He talked about the Make in India campaign from the point of view of Japanese companies.
"It is amazing that a group of students was able to organize an event like this," began Mr. SINHA. He then went on to speak about the opportunities that await Japanese companies in India and Japan-India relations. He pointed out the importance of education by saying, "It is important for both countries to work together, to cultivate talent together and pursue development together." 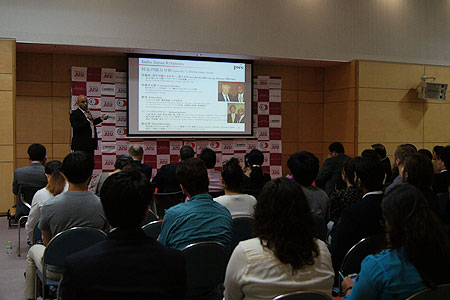 In the panel discussion and Q & A session facilitated by Pro Vice President YOKOYAMA Kenji, the participants raised numerous questions and expressed many opinions. They asked about the benefits of selecting India as a base for manufacturing and the extent to which women are involved in the Indian economy, with a particular focus on the percentage of women in management. In addition to the guest speakers, several high school principals who were invited from India to tour the campus also participated in the event, and they fueled the lively discussion session. 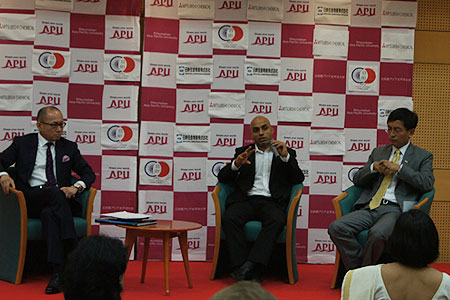 The event concluded with a closing ceremony led by Abey KAINADY, one of members of the student committee, at which time the speakers were presented with commemorative gifts.

Encouraged by a successful inaugural event, the students who organized the Indo-Japan Conclave said they hope to turn it into an annual event.