On August 20, 2015, Minister for Internal Affairs and Communications TAKAICHI Sanae and HARADA Atsushi, the Director-General for Regional Vitalization in the Minister’s Secretariat, visited APU along with Beppu Mayor NAGANO Yasuhiro. The two officials were in Beppu to observe the city’s regional revitalization efforts. 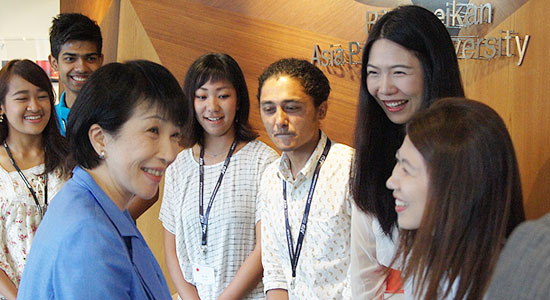 Vice President IMAMURA opened up the meeting with a brief overview of APU, in which he explained that the university was established by a large scale public-private cooperative effort among the Ritsumeikan Trust, Oita Prefecture and Beppu City. He also emphasized the mutually beneficial relationship and multicultural society that APU has with Beppu City, adding that APU alumni have grown to love Beppu so much they call it their hometown.

After the officials watched the commercial that APU students made to promote Oita Prefecture overseas, Minister TAKAICHI said, “This is great. It skillfully evokes Oita Prefecture’s appeal.”

During their visit, the officials also met with APU students from Korea, Indonesia, Bangladesh, China, Japan and Nepal, and they offered each student words of encouragement and advice at the end of the session. 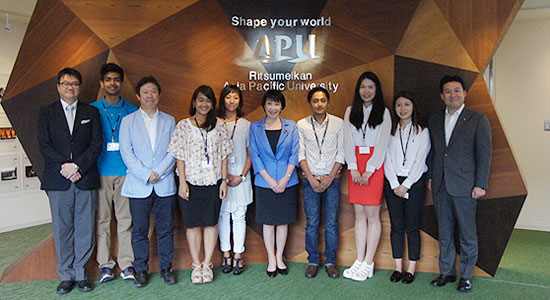