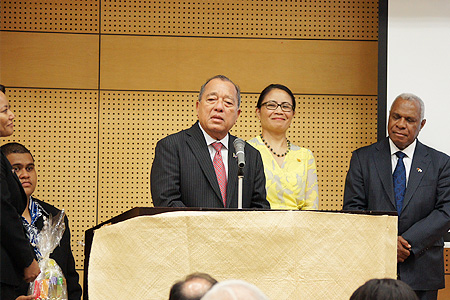 Ambassadors and diplomatic representatives from the Pacific Island nations of Papua New Guinea, Tonga, the Marshall Islands, Fiji, Samoa, and Kiribati appeared as keynote speakers, addressing issues connected with the devastating impact the unprecedented alteration in the global climate is having on these island nations and how this change threatens the future of the Asia Pacific region.

An energetic and engaged audience from the APU community, the city of Beppu, and from across Japan filled the APU Convention Hall. Opening the conference, APU President KORENAGA Shun greeted the attendees by encouraging them to take action and make a difference. 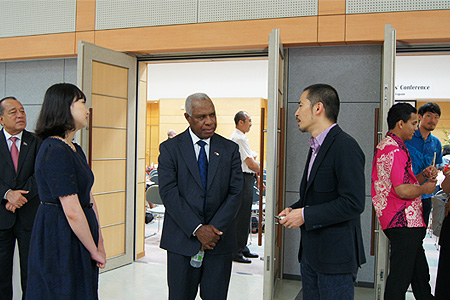 Ambassador Gabriel Dusava of Papua New Guinea spoke on the subject of a "common call," emphasizing their role as a regional big brother who must take leadership in providing solutions to climate-related challenges. When asked about the role of women in this context, Ambassador Tania Tupou of Tonga elaborated on the unique value of Pacific mothers, how resilience to natural disasters is taught as a cultural value, and suggested that this value could be shared as an alternative solution through educational exchanges. Ambassador Tom Kijiner of the Marshall Islands acknowledged their "compact of free association" with the United States includes the right to US residency, providing a refuge in case of relocation.

Continuing, Counsellor Julia Korovou of Fiji shared the concern that domestic island development strategies are being undermined by foreign official development assistance which affects the priorities of local governments. Counsellor Rapture Pagaialii of Samoa shared his personal experiences, illustrating the pros and cons of being a diplomat. Honorary Consul of Kiribati in Sendai, Mr. Kentaro Ono invited the audience to join him in designing a future for Kiribati and Pacific children who might never see their country before it is covered in seawater. Despite the heavy nature of the topic, the conference concluded with hope that APU’s multicultural campus will be able to provide a platform for further solution-oriented dialogue among students from around the world. 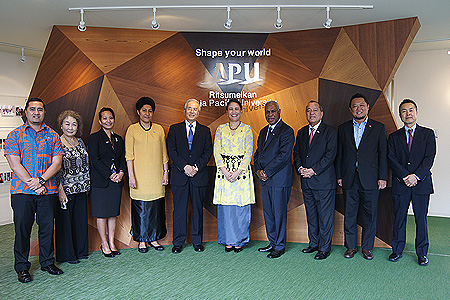 Following the conference, participants attended Oceania Week’s grand finale performance at APU’s Millennium Hall, a show filled with the beautiful music and dances of Melanesia, Polynesia, and Micronesia. After the performance, Deputy Mayor of Beppu Mr. Inomata warmly greeted the ambassadors and guests at a dinner reception held in APU’s Pacific Café. Here students could exchange ideas and views directly with the guests of the conference. 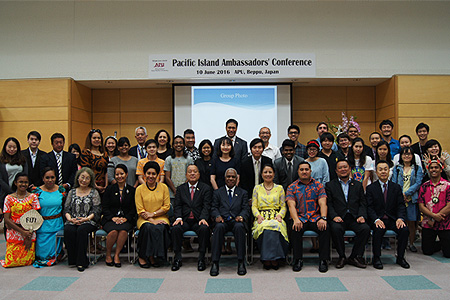 The following day ambassadors and guests paid a courtesy visit to the Governor of Oita, expressing empathy for the losses caused by the Kumamoto and Oita earthquakes. Governor Hirose thanked the Pacific Island guests for their concerns, expressing that Kyushu has values in common with those of the Pacific in regards to helping neighbors during difficult times. With Oita Prefecture selected as a host venue for the 2019 Rugby World Cup, Governor Hirose expressed strong interest in rugby exchanges and providing campsites for the three Pacific Island countries with national teams: Tonga, Samoa, and Fiji. Afterward, the guests enjoyed a tour of the Oita Prefectural Art Museum and visited the city of Yufuin prior to departing for Tokyo.