The discussion started with introductions of the panel members, followed by a brief history of the process APU went through in acquiring AACSB accreditation. Professor TAKAMOTO spoke about his first visit to an AACSB workshop in Hong Kong in 2004, and how faculty from top universities in Hong Kong and China told him they were pursuing AACSB accreditation in order to learn and further develop their programs. He also talked about deciding to pursue accreditation and the challenges in completing the first step of the process, the eligibility application.

Dean OTAKE described how he came to APU in 2009 and was assigned to work on AACSB accreditation shortly after joining the University. Vice-President YOKOYAMA provided more information about the eight year process, soliciting comments from both panel members and members of the audience who had a role in the accreditation process. 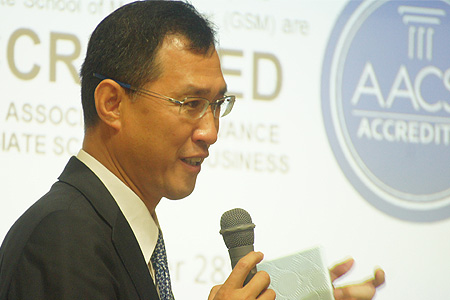 When asked for his comments, Mr. TAKITA began by talking about his time as a participant of the GCEP program and how it was an extremely valuable experience for him, even as a businessperson in his 50s. He also spoke about how he was invited to join a dinner with an AACSB peer review team who had come to APU. 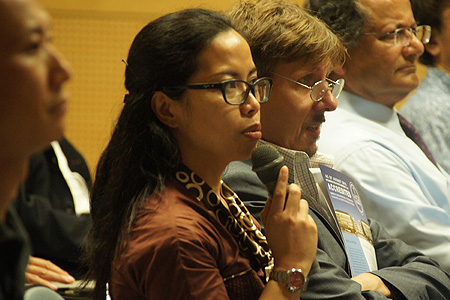 In closing, Dean OTAKE discussed how accreditation is not the end of a process but a starting point. As an accredited institution, APU must meet established standards of AACSB including Assurance of Learning (AOL) and Continuous Improvement, and how achieving these goals will require the cooperation and support of everyone in the APU community.

1: The Association to Advance Collegiate Schools of Business, a global membership organization of educational institutions, business, and other entities committed to the advancement of management education. (Link) https://en.apu.ac.jp/home/gallery/article/?storyid=170

2: The College of Asia Pacific Management was renamed the "College of International Management" in April 2009.