Mr. ONISHI, who plays an active role on the forefront of practical affairs in development cooperation, gave seminar attendees an overview of Official Development Assistance (ODA) and several examples of the assistance that he himself helped to provide in Thailand and Tanzania. He then asked attendees why they think Japan provides assistance to developing countries, and gave his thoughts on the need for that assistance. 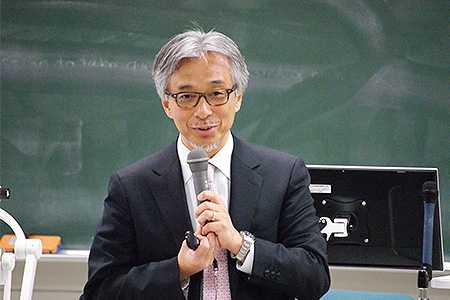 Mr. ONISHI also stated how the situation surrounding development efforts has changed considerably over time, and that the nature of international cooperation was being revisited. He proceeded to give an introduction to Sustainable Development Goals, or SDGs* for short, which were adopted by the U.N. General Assembly in September 2015. SDGs, which should idealistically be achieved by 2030, are spread across seventeen goals. In his explanation of SDGs, Mr. ONISHI covered how in order to achieve those goals, it is necessary to achieve harmony among the three principal elements of economic growth, social inclusion and environmental protection; make sure that developed countries also jointly tackle climate change, environmental protection, and other universal goals; ensure that no one gets left behind; and maintain partnerships among the national government, private sector, and civil society. He then introduced numerous examples of how efforts by JICA to support SMEs overseas, which the organization has begun in recent years, have tied together resources in Japan’s regional areas and the needs of developing countries to create beneficial effects for both sides.


During the Q&A session. Mr. ONISHI gave elaborate responses to the numerous questions posed to him. The attendees of the seminar, which included undergraduate and graduate students and members of management at companies based in Oita Prefecture who have an interest in development and development cooperation, listened attentively to what Mr. ONISHI has to day to gain takeaways for their study, research and business endeavors.

Since 2006, APU has been commissioned by JICA to offer training on local development for mayors and administrative officials from Africa, Asia and South America.