One year has passed since the Kumamoto Earthquakes occurred in April 2016. Our thoughts continue to be with everyone who has been affected by the earthquake, and we pray that all reconstruction efforts in the aftermath of the disaster are completed as soon as possible.

Beppu City and APU also felt strong tremors while these earthquakes were occurring. Building on this experience, APU has worked with a number of agencies such as the Oita Prefectural Government and the Beppu Municipal Government, as well as members of the local community and other agencies, to improve and extend its disaster response and prevention capabilities, continuing to ensure that our students have an environment where they can pursue their studies in comfort and safety.

These measures include a number of areas, such as addressing issues in our crisis management procedures that arose during the disaster. This includes educating students on disaster preparation and prevention, improving our on-campus disaster prevention drills for faculty, staff, and students as well as the evacuation drills for AP House, and improving the safety confirmation system that we use to verify the safety of our students in the event a disaster occurs.

These measures compliment the Emergency Disaster Response Handbook for Students that is publically available on the APU homepage. This handbook provides students with information they need to respond properly to a range of disasters. The handbook is available here: https://en.apu.ac.jp/home/life/content40/ 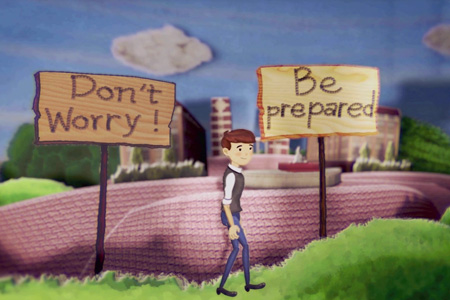 APU students worked with faculty to create a video for new students that explains how to prepare for and react when an earthquake strikes.

The APU homepage will also include links to the University's Facebook page and disaster-related websites from the Oita Prefectural Government, the Beppu Municipal Government, and other organizations. These measures will also make it easier for our students and their family members to access the information that they need. By taking step to share information with our overseas offices as well, we have extended our communications network, enabling us to communicate information in languages other than Japanese and English.

To mark the anniversary of the Kumamoto Earthquakes, Huffington Post Japan interviewed APU Vice President IMAMURA Masaharu about our experience with the earthquakes and some of the lessons the University learned. The article (available in Japanese only) with pictures is available here. A summary of the opening is included below.

The string of tremors occurring in April 2016 that came to be known as the Kumamoto Earthquakes also affected the cities of Beppu and Yufu in Oita Prefecture, shaking them with earthquakes registering a low 6 on the Japan Meteorological Agency's seismic intensity scale.

One of the country's prominent international universities, Ritsumeikan Asia Pacific University (APU), is located in Beppu City. About 6,000 students study here, with half of those coming from about 90 countries and regions from around the world. These earthquakes struck in April, right around the start of the school year. Many of the international students had no experience with earthquakes.

The Japanese Government, through organs such as the Ministry of Education, Culture, Sports, Science and Technology, has been working to promote plan to bring 300,000 students to Japan. For an earthquake-prone country like Japan, careful consideration must be given to the fact that these students could become victims of a natural disaster. For universities promoting internationalization through increasing the number of international students, what do they need to do to prepare for these disasters? Huffington Post took the opportunity of this one year anniversary to speak with APU Vice President Masaharu Imamura to talk about the earthquakes and what they have learned.