On Wednesday, April 19, a ceremony was held to mark the start of the Iwata Academy - APU/Ritsumeikan Course. The ceremony was attended by 23 first-year Iwata Academy students, their parents, and representatives from Iwata Academy and APU. Also attending were the APU student teaching assistants (TAs) that will be involved in this course. 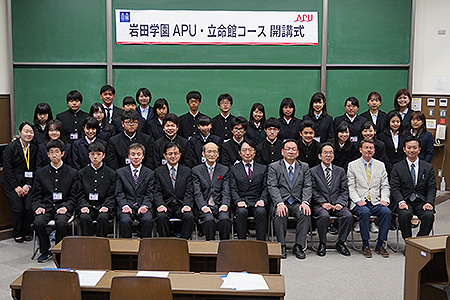 During the opening ceremony, APU Vice-President YOSHIMATSU Hidetaka offered a few words of encouragement before presenting each participating Iwata Academy student with an APU library card. Iwata student TAKEO Eri spoke on behalf of the new participants, stating "Through this program, I want to expand my horizons and learn many new things."

Ritsumeikan Asia Pacific University and the Oita City-based Iwata Academy signed a university-high school liaison agreement in May 2007 as a way of promoting the development of globally-minded graduates in Oita Prefecture. This agreement led to the establishment of the Iwata Academy - APU/Ritsumeikan Course in April 2008. Including this year's intake, the program has so far welcomed 189 students from Iwata Academy. Program participants study under a curriculum developed by APU and the Iwata Academy.