A commercial created by APU student KONII Chiharu (College of International Management, 1st year, Japan) won a top award for the 2017 JFN Student Radio Commercial Contest. The JFN contest invited students at universities and vocational schools from around the country to submit radio commercial scripts based on the theme "the school you attend." Nationwide, this year's JFN Student Radio Commercial Contest attracted 1,900 entries. Ms. Konii was one of two students to earn top honors for the Kyushu/Okinawa block. 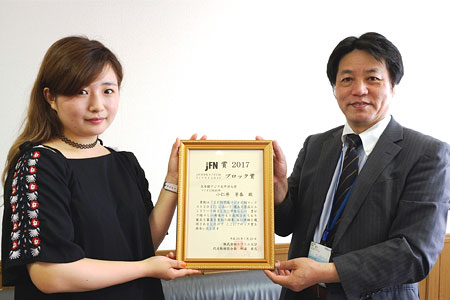 In creating her entry for the contest, Ms. Konii said, "I tried to express my own surprise at what I learned when I met international students at APU." Her entry expressed her personal experience making friends from many different countries at APU, and how these relationships made her feel more connected to news and events happening around the world. During the July 21 award ceremony at APU, she shared credit with the University, "I think that this award is due to the appeal of APU rather than my own efforts. I hope to further broaden my studies at APU."

Ms. Konii's radio commercial will be broadcast by Kyushu area FM stations until August 3rd. The commercial can also be heard on the contest web site.
http://www7.jfn.co.jp/cmc/