Having successfully obtained accreditation from AACSB International*, the College of International Management and the Graduate School of Management are now recognized as a provider of world-class business education.

As an AACSB-accredited school, APU earned the right to establish a chapter of Beta Gamma Sigma (BGS), a premier honor society that only serves students of accredited business programs. On September 15, 2017, a BGS induction ceremony was held at B-Con Plaza in Beppu, and 24 APU students were admitted as new members of BGS. At the ceremony, new member representative AVILA Carlo Irawan (Graduate School of Management, Class of September 2017, Indonesia), expressed his aspirations by saying, “Being a BGS member in APU is very special because it's the first chapter ever in Japan as well as because the members have a very diverse nationality background due to the multicultural environment. I think the connection that is established by BGS will be a valuable asset for us as alumni in the future as long as we stay connected.”

BGS was formally founded in 1913, making it one of the oldest scholastic honor societies for business students. Only the highest-performing students of AACSB-accredited schools are invited to join the society. As of May 2017, there are approximately 820,000 members in over 580 chapters in 190 countries and regions. Students can join BGS while enrolled, and they remain members for life.

Membership in BGS not only creates a community of outstanding students at APU, it enables those students to connect with other BGS members around the globe, opening up almost limitless possibilities for future career development.

Click here for more information on the screening and induction procedures for the APU Chapter of BGS. 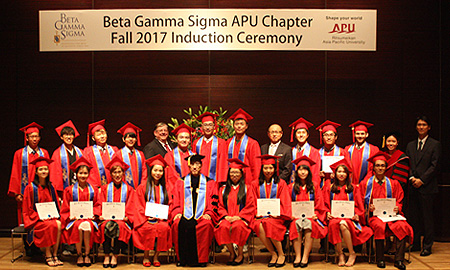 A scene from the BGS induction ceremony on September 15

*Established in 1916, the Association to Advance Collegiate Schools of Business (AACSB) is a global membership organization of educational institutions, businesses, and other entities committed to the advancement of management education.

AACSB accreditation is widely regarded as the highest level of accreditation for business schools. Being an AACSB-accredited business school means being part of a network of 775 institutions spanning 52 countries and territories* across the globe who have successfully met the standards set forth by the association, and who have committed to maintaining these standards. Less than 5% of the 16,000 business school programs worldwide have earned this accreditation (as of August 2016).