A team of APU students conducted a research project in Kumamoto Prefecture to develop the Aso region's first exchange-centered, high value-added tourism products for foreign tourists. Funding for the project came from the Ministry of Economy, Trade and Industry's Regional Core Business Creation Support Program. Professor Todoroki, Dean of the College of Asia Pacific Studies, lead the project under the auspices of the International Center for Asia Pacific Tourism (iCAPt), an affiliated research center of the Ritsumeikan Center for Asia Pacific Studies (RCAPS). The research project aligned with the Ritsumeikan Trust's efforts to support the recovery of areas affected by the Kumamoto Earthquake. The research project involved graduate students utilizing skills acquired at APU to support the area via tourism-based recovery.

The research project began on January 15, 2018 with Makoto Kawazu, head of Jigoku Onsen Seifuso, and other stakeholders from the Aso region visiting the APU Graduate School's Cultural Heritage Tourism class. Jigoku Onsen Seifuso is located in the town of Minami-Aso in Kumamoto Prefecture, one of the towns receiving support from the government program. Mr. Kawazu spoke firsthand about the magnitude of the damage caused by the Kumamoto earthquake and the progress the local community has been making towards recovery. The visit reminded students that the earthquake damaged areas close to Beppu and conveyed the region's commitment to recovering through tourism, one of its main industries.

A few days later, a team of 15 students visited the Aso region to conduct a full day of fieldwork. The team consisted of thirteen graduate students from seven different countries and regions and two undergraduate students. Fieldwork destinations included Jigoku Onsen Seifuso, which suffered damage in the earthquake; Aso Bridge, which collapsed in the earthquake; the Choyo Station section of the Minami-Aso railroad, which has yet to be fully restored; the Futae no Toge section of the Bungo Road that connects Kumamoto and Oita; and Aso Shrine, which saw its main hall rent asunder in the earthquake. Mr. Kawazu and other stakeholders from the region accompanied the team during the fieldwork, providing a range of perspectives at each site they visited. The team learned of Aso's regional history, culture, and local specialty products, all contributing to the area’s tourism appeal.

Jigoku Onsen was in the process of dismantling its ryokan facilities, significantly damaged by a landslide from the nearby mountain. The students surveyed the scene to understand the scope of the disaster. During this segment of the trip, they also tried Jigoku Onsen's famous Suzume no Yu footbath, covering their hands and feet with the mud from the hot spring while listening to Mr. Kawazu speak about his experience of the earthquake. At the beautiful Choyo Station, the station manager welcomed students by playing the ukulele. Train service through Choyo Station stopped after the earthquake and has yet to resume. It is hoped one day the station will become a lively sightseeing spot once again.

Each student put forth ideas for the future of the regional tourism industry. Aso regional leaders are utilizing student proposals to design initiatives for the region. 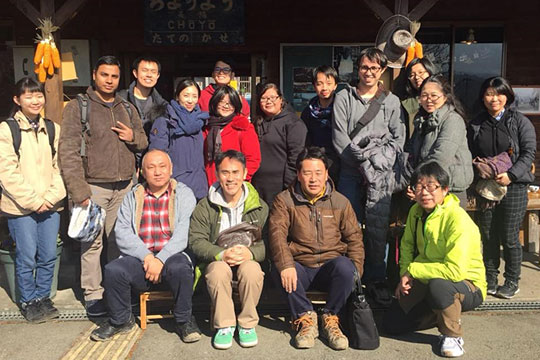 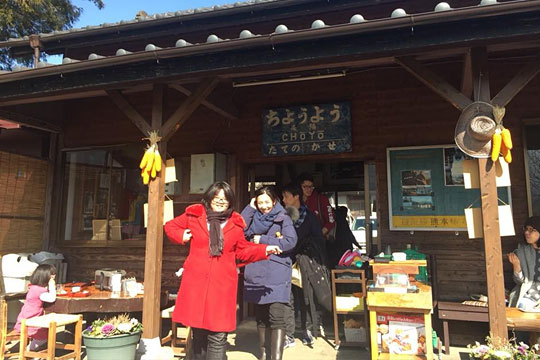 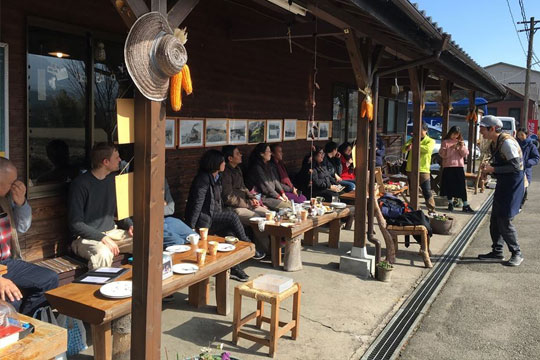 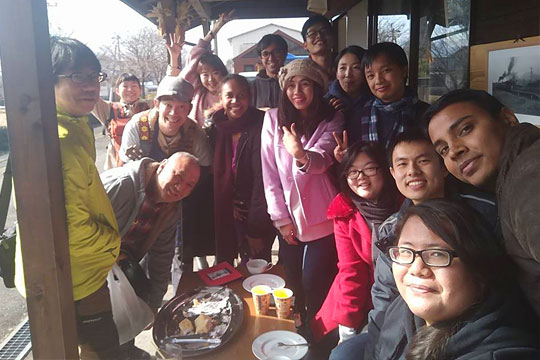 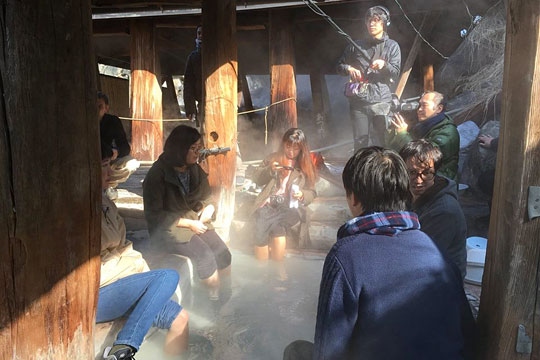 “This is a wonderful program for students interested in tourism and regional development. Through this fieldwork, I was able to share many ideas with international students from a range of backgrounds and expand my regional development expertise. I was also able to observe the aftermath of a natural disaster up close and present my ideas along with the international students. This type of learning is different from reading books or documents in class. Interviewing local stakeholders in the area and interacting directly with those who were affected by the disaster greatly increased my motivation to contribute. I think researching and learning about earthquake policy in the real world is far more effective than simply studying in a classroom.”

“I participated in fieldwork in the Aso region on January 21. We began the tour by listening to an account of the earthquake's impact on Jigoku Onsen while trying the onsen's foot bath. It seemed like almost all of us were having our first experiences with a foot bath and we enjoyed feeling Jigoku Onsen's high quality spring water on our skin. Conversely, we also saw all over Aso the traces of the large earthquake that hit in 2016 and were struck by how much further the region has to go to fully recover. In Futae no Toge, with cameras in hand, we admired Aso's magnificent natural scenery. We wrapped up the tour by walking around the Aso Shrine area and having an energetic discussion with the local stakeholders about methods for promoting Aso's appeal. This fieldwork was very meaningful to me.”