Saeko Kawashima, who is currently working in The Hague, The Netherlands, was invited to speak at a Ritsumeikan Center for Asia Pacific Studies (RCAPS) Seminar entitled “Evolution and Challenges of International Criminal Justice Procedure- Comparison between the ICC and the ICTY” on November 16. She is well-versed on the impact of international criminal justice on the war-torn societies in the Balkans.

Since the establishment of the UN International Criminal Tribunal for the former Yugoslavia (ICTY) in 1993, the system of international criminal justice has dramatically developed as part of the global efforts to judicially address individual responsibility for war crimes, crimes against humanity, and crimes of genocide. The creation of the International Criminal Court (ICC) accelerated this development.

The ICTY and ICC have faced with numerous challenges which national courts would not normally encounter. Such challenges arise from the international nature of their proceedings as well as the enormous scale of the crimes to be tried.

Upon illustrating the procedures devised by the ICTY and ICC to address these challenges, Ms. Kawashima analyzed today’s trends in the efforts to adopt measures against serious crimes under international law, with reference to recent cases of Syria in 2016 and Myanmar in 2018.

This seminar not only afforded an extremely rare opportunity for APU students to learn about how international criminal justice responds to atrocious crimes directly from an expert with remarkable experience in the field, but also provided valuable insight for those students who are interested in working in international organizations, especially in the field of peace-building.

This seminar was chaired by professor of international law Yukiko Takashiba, with Professor Susumu Yamagami acting as a discussant. 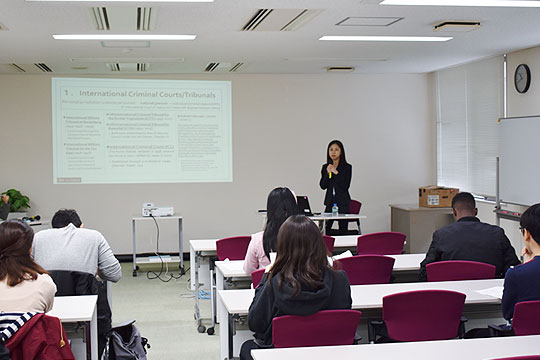 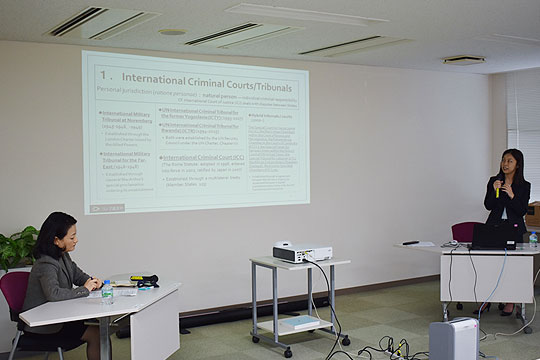 An Interview with Saeko Kawashima

Kawashima: I completed two internships in The Netherlands prior to moving there. One of these internships was with the United Nations International Criminal Tribunal for the former Yugoslavia (ICTY). I truly enjoyed my internship there. It was a place where I could make my wish of working in an international environment come true, with colleagues from different cultural backgrounds, as well as the opportunity to apply my knowledge of law that I acquired through my studies. As such, when ICTY offered me a job I decided to move to The Netherlands. I worked at ICTY till the end of its mandate last year, for a total of more than 12 years. Including my internships in The Netherlands, I have lived there for a total of about 13-14 years.

APU: That is a really long time! What have you been up to since the end of ICTY’s mandate last year?

Kawashima: I have been working as an independent legal consultant. I have my own office under the name Sawara Legal Consulting.

APU: I see. I am sure many of us would like to learn more about your life in The Netherlands. Did you face culture shock of any sort?

Kawashima: The biggest source of culture shock I experienced was the direct nature of people in The Netherlands. This was a polar opposite from Japanese people's tendency to be more ambiguous. That definitely took a little bit of time getting used to.

APU: Interesting. Dutch people are also known as some of the tallest people in the world. Was that eye-opening for you?

Kawashima: Yes, definitely. Being relatively petite, it was difficult for me to buy normal clothing of my size, especially suits. Also, I found it difficult to reach the top shelves at supermarkets.

APU: Your presentation is entitled “Evolution and Challenges of International Criminal Justice Procedure.” Could you please tell us how and when you developed interest in this topic?

Kawashima: As I mentioned earlier, I did my internship at ICTY before moving to The Netherlands. How this happened was really a stroke of serendipity. When I was completing my master’s degree at New York University, my roommate from the Netherlands also did a similar internship and recommended that I apply. I applied and got accepted. That was when I started to learn more about ICTY and international criminal justice, in general, and become more interested in it.

APU: Having done your undergraduate degree at one of the top universities in Japan before moving on to complete your master’s degree in the United States and then finally working and living in The Netherlands, your career path is, without a doubt, rather different from the average Japanese lawyer. Do you have any words of advice for APU students regarding how they could decide on their future career paths?

Kawashima: I would say that it is important to try new things before you can determine where your passion and interests lie. Be brave. Be courageous. Go out and see the world to get a better idea of your likes and dislikes as well as what you are good at, before deciding on your career path. In Japan, university students are pressured to start looking for jobs one year before graduation. In my opinion, it is perfectly fine to take time to explore and gain new experiences before searching for jobs.

APU: Wise words indeed. What would you say to youths who desire to explore the unfamiliar but lack courage to do so or face familial opposition?

Kawashima: In Japan, people often conform to societal norms and are overly focused on being hired by a “good” or “prestigious” company upon graduation. The fear of venturing into the unknown is therefore completely understandable. However, in being excessively conscious about social pressures, they fail to live in the here and now. You only live once, so if there is something you really want to do, you might regret not doing it when you get older. Even now, I still keep reminding myself of the quote “If you don’t try, nothing will ever happen.” Life does not always go as planned, and that’s all right. The fact that you tried is already precious and admirable. You will definitely learn something from it, which you can use in one way or another in your next step in life. As for familial opposition, I can’t really advise as I have been blessed with parents who have been supportive of my decisions. However, one thing to definitely consider would be finances as it does cost money to go abroad and explore. Not everybody is able to afford that. But nowadays, compared to when I was a student, more universities and organizations offer programs to study abroad, many of which come with scholarships. Therefore, I would recommend you to conduct research and seek such opportunities. It is important to first get to know what is available out there.