BEPPU, Oita - Ritsumeikan Asia Pacific University (APU) established a new Event and Project Support System to encourage students to pursue their ambitions and make an impact on both a local and a global scale. One of the project categories under this system is Type C: Enterprise & NPOs Co-Create Project , which recruits students for projects that are selected from applications received from companies and NPOs that wish to collaborate with APU students. In cooperation with these external organizations, students are able to leverage their ideas and skills gained from their academic careers at APU.

APU implemented the Saganoseki x APU Future Co-Creation Project from July to December 2018 as the first initiative under the Type C category. The project was held in collaboration with the Saganoseki branch of the Oita Chamber of Commerce and Industry, and was sponsored by the Saganoseki Smelting Plant of Pan Pacific Copper Co., Ltd., a company based in the Saganoseki area of Oita City. The project started with a request to support the urban development of Saganoseki—an area famous for its horse mackerel and chub mackerel—by leveraging the vision and ideas of APU students to rediscover the appeal of the area. It took shape as a joint project aimed at promoting the Saganoseki area.

A total of 15 APU students from six countries and regions participated in the project. Divided into four teams, they visited the Saganoseki area on three separate occasions in October and November to hold camps and conduct fieldwork. To deepen their understanding of Saganoseki, the teams explored the area on foot, individually selecting and visiting research areas based on recommendations from local advisors. They also met and conducted interviews with local residents. Based on their findings, the teams developed proposals to revitalize the area. They also conducted mid-project presentations and received insightful feedback from advisers as they worked on their proposals. Preparations were quite challenging, and the final proposals represented the culmination of a long series of discussions. 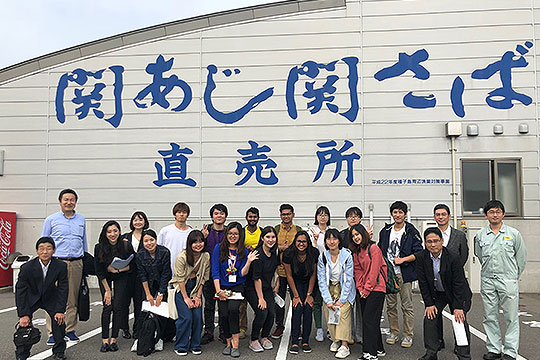 On December 1, 2018, the four teams conducted their final presentations at the Meeting Hall of the Hayasuihime Shrine located in Saganoseki, sharing the proposals they had crafted to support regional revitalization. The presentations were attended by over 50 local residents. The students were somewhat nervous while presenting in front of a large group of local community members, but all teams presented the findings of their research with a great deal of enthusiasm.

The presentations were judged by a panel of regional stakeholders, who selected the Downtown Driftwood Art proposal as the winner. This plan aims to revitalize the region by utilizing driftwood found throughout the region as artwork. Feedback from local community members noted that although the students conducted their activities over a short period of only two months, the regional challenges addressed by each team were quite relevant. Although the activities conducted as part of the project came to a close with the final report meeting, the team that delivered the winning proposal has continued to engage in discussions with members of the Saganoseki community to help make the winning proposal a reality. Operations to realize the Downtown Driftwood Art proposal have only just begun, so stay tuned for further developments.