The 14th Thai Language Speech Contest was held on Saturday, December 14, 2019 at the Kanda University of International Studies, and College of Asia Pacific Studies fourth-year student VU Hoang Duy took home the first-place prize in Category 4, the category for students with at least six months of study abroad experience in Thailand. 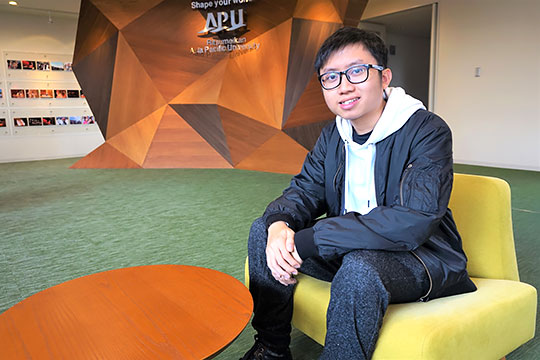 VU, who is from Vietnam, studied Thai before coming to Japan and spent three years of high school in Thailand. In Thailand, he was exposed to Thai culture, and he developed his communication skills by talking to friends. After graduating high school, he wanted to learn another language, so he chose APU where he could learn Japanese while majoring in tourism in English. Although he could speak Thai, VU enrolled in Thai I after coming to APU to learn the grammar, reading, and writing he had not learned in Thailand and progressed to advanced levels. For this speech contest, he wrote a speech in English, translated it into Thai, then had his friends and instructors check it for him. He practiced his pronunciation almost every day until the competition and went to weekly coaching sessions with his Thai instructor. His stellar performance is the direct result of his hard work.

VU has been working as a Resident Assistant (RA)* in the dormitory since his second year and currently serves as an RA Leader. To make sure he could better understand the dorm residents and other RAs, VU worked on developing his communication skills in Japanese, a language he had no prior exposure to before APU, and when we interviewed him for this article, he responded in fluent Japanese. His goal is to launch a career in the tourism industry in Japan where he can make full use of his command of four languages: Vietnamese, Thai, English, and Japanese.

In addition to Japanese and English, APU students can learn six languages from throughout the Asia Pacific region (Chinese, Korean, Malay/Indonesian, Vietnamese, Thai, and Spanish) from the elementary to the advanced level. Like VU, students can learn these languages by taking full advantage of the APU campus. In addition to taking classes, they can talk with friends who are native speakers of these languages outside of class.

* RAs are a group of students who assist residents of the AP House student dormitory in acclimating to life at APU and in Beppu.