As part of the run up to APU’s 20th anniversary, APU hosted the "Oita Kanji Expedition / Kanji Charades Competition: Kanji from Human Poses" on Sunday, November 17, 2019 at APU Plaza Oita in Beppu.

This event was sponsored by The Shirakawa Shizuka Institute of East Asian Characters and Culture at Ritsumeikan University. The late Professor Emeritus Shizuka Shirakawa emphasized the necessity of utilizing a systematic approach to kanji education that creates understanding rather than using rote memorization, and she embraced a morphological approach to kanji as part of her research. Building on the outcomes of this research, the Shirakawa Institute undertakes cultural projects with the aim of educating people about East Asian characters and culture.

A topic is selected for each time this course is presented, and the activities involve learning the origins and structure of kanji through observation and hands-on experience in addition to a classroom lecture. While this course has been held more than 200 times across Japan, this was the first time for it to be held in Oita.

Attendees heard stories about the origins of kanji, learning that kanji evolved out of simple line drawings that were meant to capture and express characteristics of the things around them. They learned, too, how kanji also evolved from various human poses. Attendees split into teams and, taking hints from charts that showed the progression of kanji from ancient times to the present, each team came up with and presented poses for the characters for “walk” (歩), “run” (走), “line up” (並), “crowds” (衆), and others. An energetic group of fifty people, including APU students and elementary school students from Beppu and Oita, enjoyed the event and their new-found kanji knowledge. 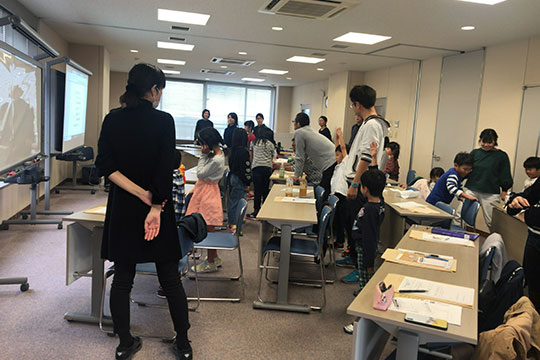 Participants contemplate the origins of the pose for “person” (人). 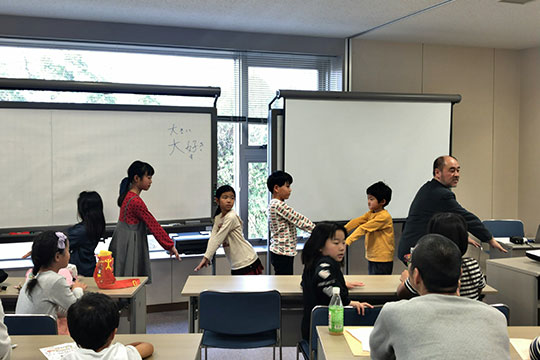 Students hold a pose, talking about why standing back resembles the character for “north” (北) and what it means. 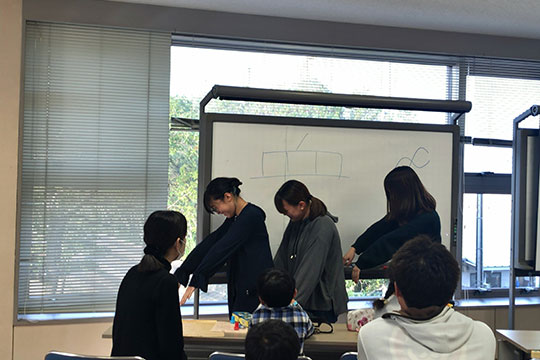 APU students strike a pose for the character for “crowd” (衆).