On Saturday, December 12, the APU Alumni Association Europe Chapter presented a webinar on career development with the UN. As part of its ongoing campaign “Giving Back to APU,” and in commemoration of APU’s 20th anniversary and the 75th anniversary of the United Nations, the alumni aimed to inspire the next generation of APU students and alumni to explore the possibilities of building a career within the UN system. This webinar, though primarily initiated by the Europe Chapter, is a joint effort of 12 alumni currently serving in various capacities across ten UN agencies, funds, and programs in locations as diverse as Africa, the Americas, Asia, Europe, and the Pacific.

Through a panel discussion and breakout sessions, these alumni shared their stories, drew lessons learned from their own careers, and provided the audience of 170 zoom participants and 230 YouTube live stream viewers practical tips and insights on the UN's recruitment process.

There are currently 25 APU alumni working in 15 different UN specialized agencies, funds, and programs, representing nearly half of the UN system. In his opening remarks, APU’s President Haruaki Deguchi commented, “The 25 alumni working for the UN are certainly the pride of APU, but their selfless spirit of dedicating their time and effort to pave the way for their juniors is even more commendable.” He added, “As is embodied in the APU 2030 Vision, regardless of what career our alumni pursue, I hope they turn out to be individuals who can make a positive change to the world.” 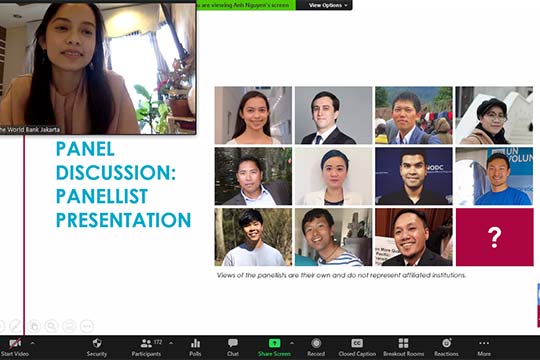 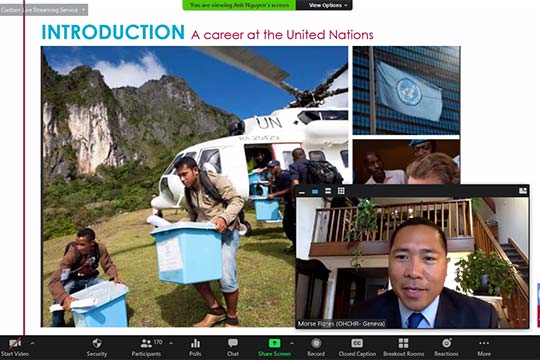 Over the last decade, a number of similar workshops has been organized through the Career Office, although usually with a single speaker. Mr. Martyn Denis '12 of the UNICEF Country Office in Beijing remarked, “I remember attending a career workshop held at APU and it was thanks to that experience that I realized a career with the UN was actually possible.”

Mr. Morse Caoagas Flores '06 of the UN Office of the High Commissioner for Human Rights, the leader of the Europe Chapter, said, “Since we were some of the first APU students and therefore could not hear from any seniors who were already employed at the UN, we are aware of the difficulty and wish to make the path easier for our juniors. However, I must stress that hard work and perseverance are indispensable.”

One of the current APU students who attended the webinar said, “I have been trying to gather information related to a career with the UN on my own but have always found the sources to be abstract. Today’s webinar was extremely helpful in that the speakers shared concrete information, which gave me a clear idea of what I need to focus on from now in order to achieve my desired career.” 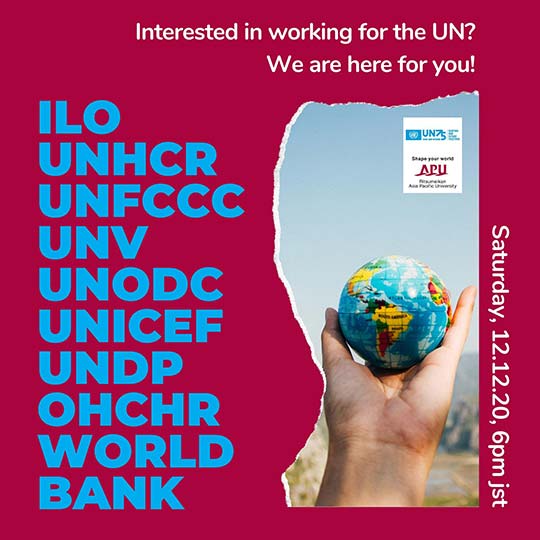 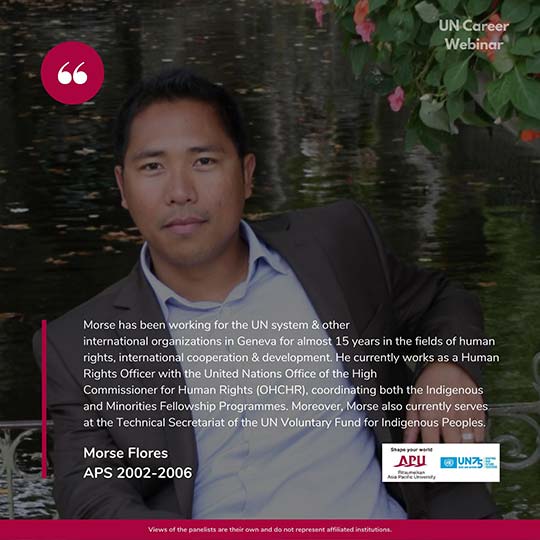 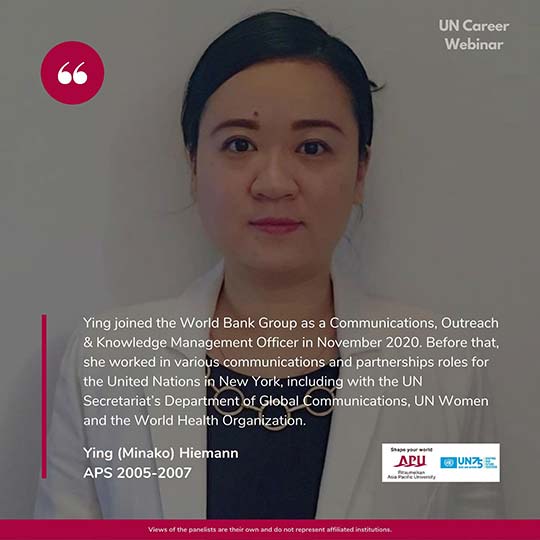 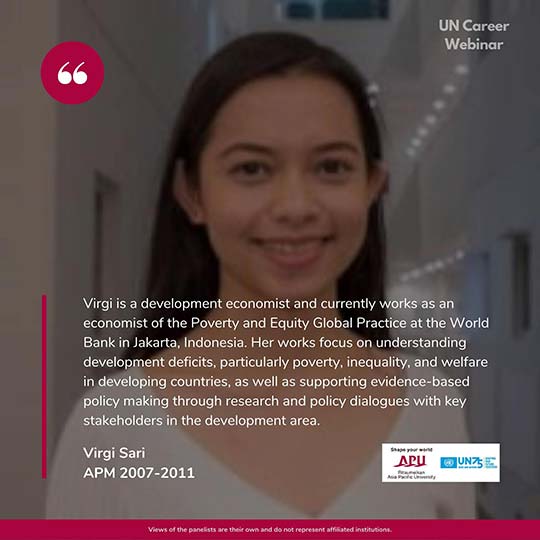 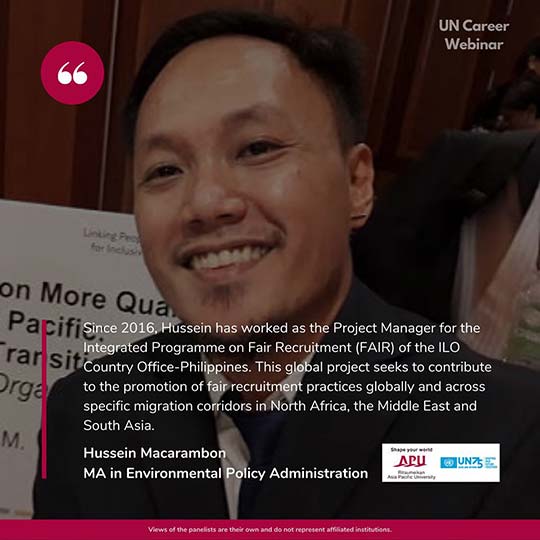 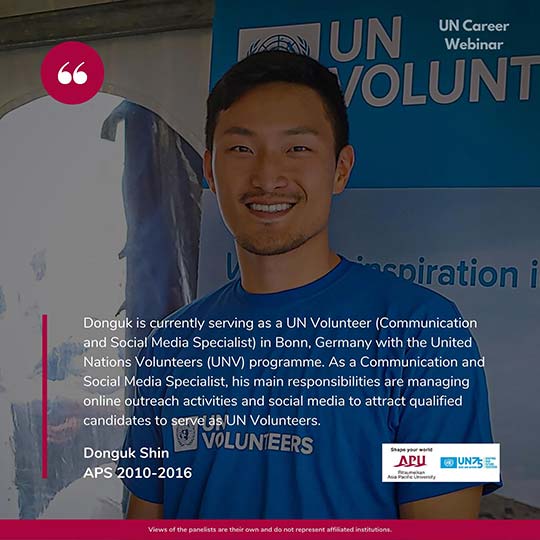 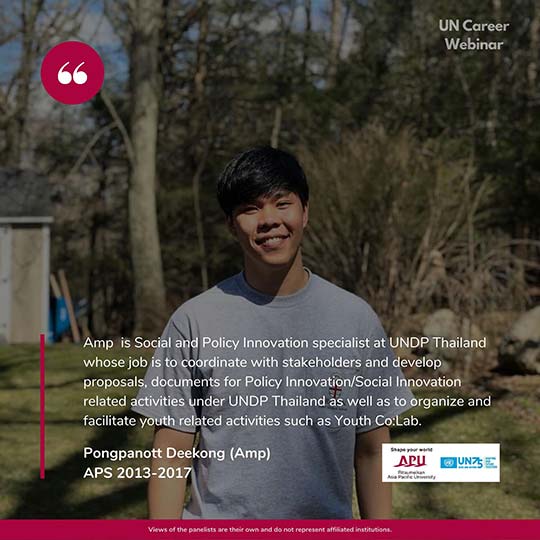 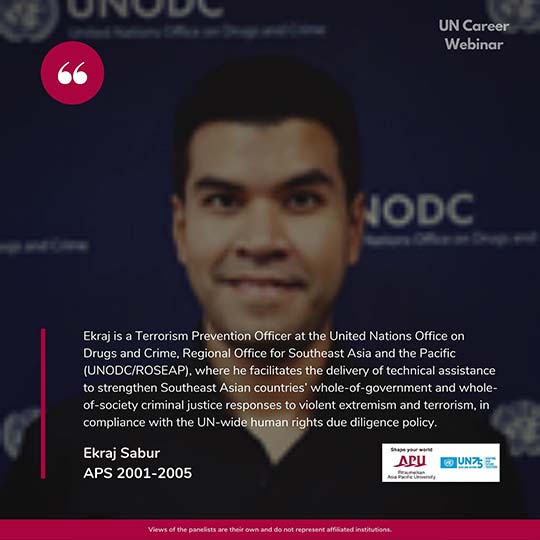 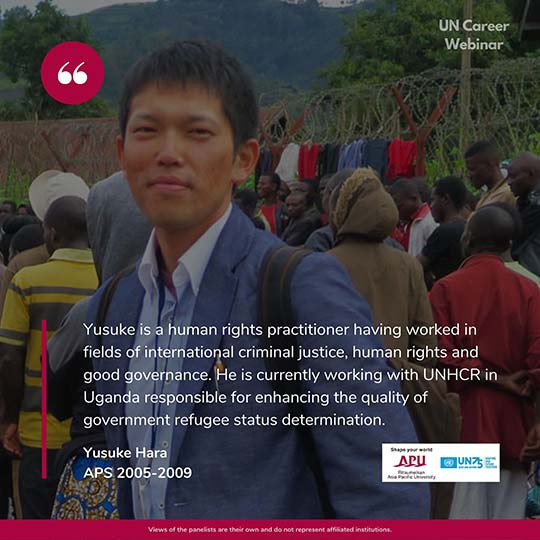 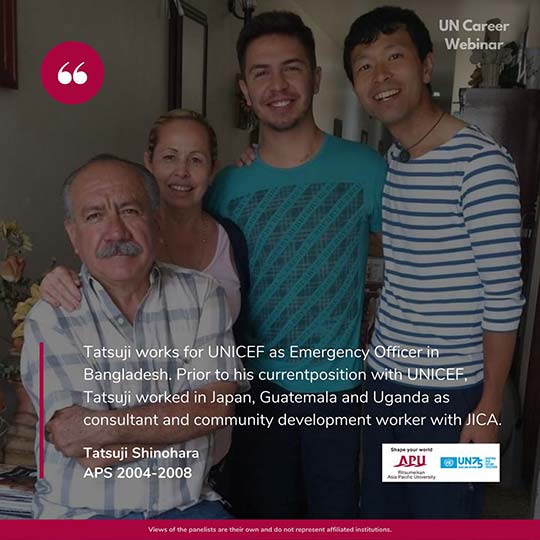 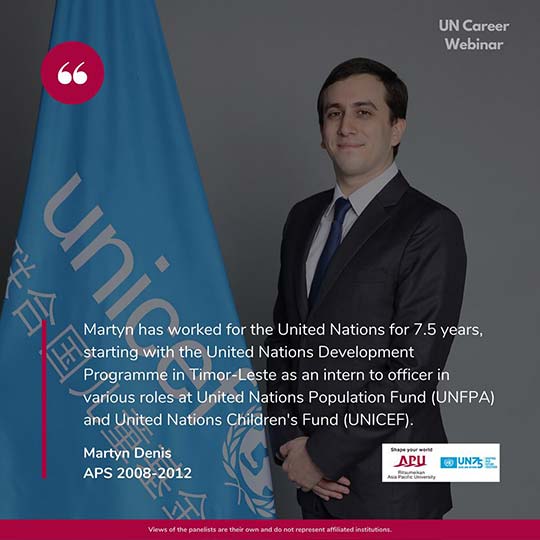 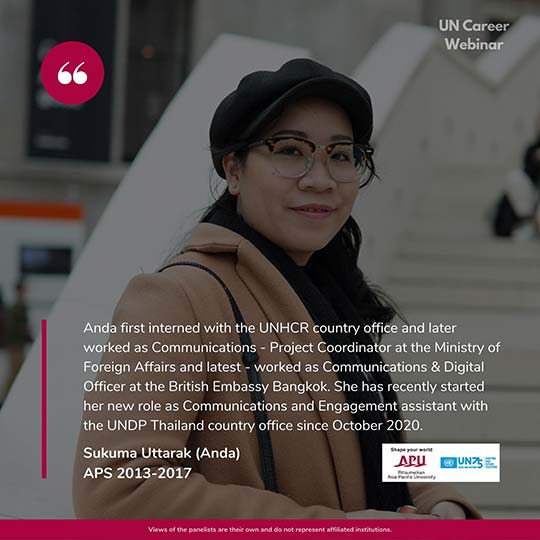