On Saturday, May 8, 2021, two APU students who made it through the qualifying round participated in the online Indonesian Speech Contest co-sponsored by the Indonesian Embassy in Japan and the Japan Branch of the Indonesian Language Education Association. One student, Ms. Moka Haruki (College of Asia Pacific Studies 2nd year), won a special prize. 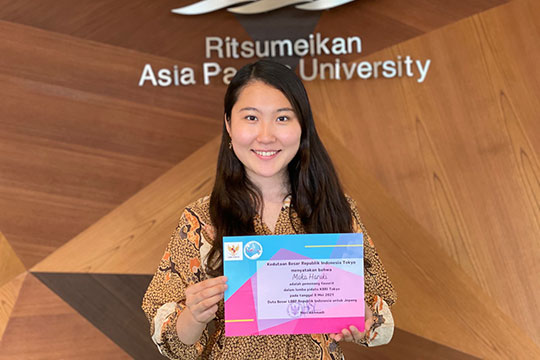 Ms. Haruki, born in Tokyo, has been taking Indonesian classes since high school. Thanks to the influence of one of her high school instructors, she studied abroad in Sumatra to learn about the problem of deforestation in Indonesia. To further her study of such environmental problems, she enrolled at APU, where she continued practicing the language in APU House. By the fall semester of her 1st year, she was already in Indonesian IV and receiving outstanding grades. Her passion for ecological issues was made apparent in her speech, which emphasized the importance of environmental protection to avoid further tragedies like the current pandemic.

To prepare for the speech, she consulted online with her advising instructor, Senior Lecturer Sri Budi Lestari, who taught her subtle nuances and more accurate expressions. Ms. Haruki then delivered it to her Indonesian friends (both from her study-abroad days and from APU) for their opinions.

Ms. Haruki says, particularly now that the COVID-19 crisis has made it difficult to study abroad, being at APU, where she has friends to speak in Indonesian with, is one of her strengths. With her future goal to protect Indonesia’s forests in mind, she wants to make the most of her student life, focusing not only on academics but community activities related to the environment as well.

In addition to Japanese and English, APU offers courses in the 6 Asia Pacific (AP) languages, which are Chinese, Korean, Malay/Indonesian, Spanish, Thai, and Vietnamese. Not only are these languages spoken all over the world, but they are the mother tongues of many APU students. Consequently, these languages can be heard on a daily basis throughout campus, creating many opportunities to learn from interacting with students from different countries and regions, even outside of class.