On Thursday, April 14, 2022, Miyama City, Fukuoka Prefecture and APU held a comprehensive agreement ceremony at Miyama City Hall. The ceremony was attended by Mayor Morito Matsushima from Miyama City and Vice President Hiroshi Yoneyama from APU, who signed the agreement.

Miyama City has declared itself a zero-carbon city, aiming for virtually zero greenhouse gas emissions, and is home to Miyama Smart Energy and Biomass Center. In April 2023, the College of Sustainability and Tourism (under construction) will be established. Aim to realize a sustainable society, APU and Miyama City signed an agreement for friendly exchanges that take advantage of the characteristics of both parties. They will work to build a sustainable decarbonized society and develop human resources. In addition, more people will be involved in conducting various environmental research and education in Miyama City, thereby contributing to regional promotion. 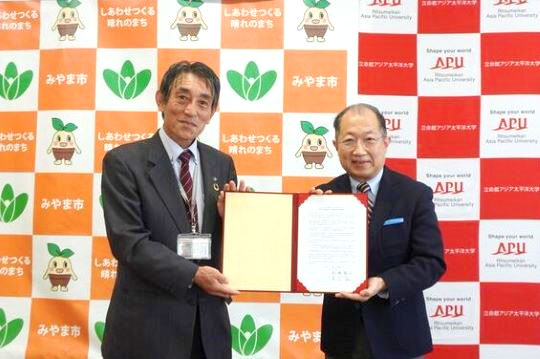