On Thursday, December 17, TAKAHASHI Mamoru and SATO Kimiaki of the Beppu City Buddhist Federation visited APU to donate ¥100,000 collected under its year-end charity drive to the YouMe Nepal Youth, a student-run event organizing committee at APU.

After Nepal earthquake in April, 2015, TAKAHASHI, the head of the Federation, developed a strong interest in Nepal’s recovery and lobbied the Federation to donate a portion of funds it collected to the reconstruction efforts. Since YouMe Nepal Youth was already undertaking events on campus to raise awareness of the situation, an agreement was reached for the group to receive a donation. 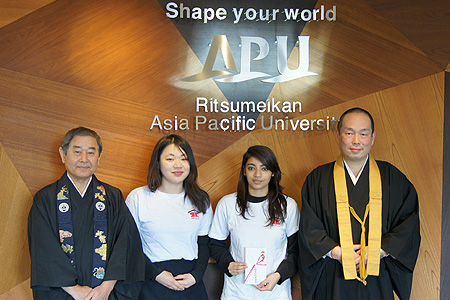 After the donation was presented, an informal discussion session was held during which talks focused on the fact that Japanese and Nepalese Buddhism share several common features. YouMe Nepal Youth director KAI Shiori (College of Asia Pacific Studies, 4th year, Japan) and assistant director Poudyal Ritu (College of Asia Pacific Studies, 4th year, Nepal) both said they felt strongly that “religion and the desire to help other people can transcend national boundaries.”

The donated funds will be directed through YouMe Nepal Trust, the club's parent organization, and will be used to assist in educational development efforts in Nepal.